What is Angkor Wat? Angkor is one of the most important archaeological sites in South-East Asia. Stretching over some 400 km², including forested area, Angkor Temple of Angkor Wat at Dawn by David HendersonArchaeological Park contains the magnificent remains of the different capitals of the Khmer Empire, from the 9th to the 15th century, including the famous Temple of Angkor Wat and, at Angkor Thom, the Bayon Temple with its countless sculptural decorations. The influence of Khmer art, as developed at Angkor was a profound one over much of South-East Asia and played a fundamental role in its distinctive evolution. Khmer architecture evolved largely from that of the Indian subcontinent, from which it soon became clearly distinct as it developed its own special characteristics, some independently evolved and others acquired from neighbouring cultural traditions. The result was a new artistic horizon in oriental art and architecture.,

Angkor was designated a World Heritage Site by UNESCO in 1992 which provides funding for the extensive conservation work which started in 1986.

Angkor lies 5.5km north of the growing and bustling town of Siem Reap which has a large number of hotels and guest houses which serve the growing number of tourists to the area. Siem Reap has colonial and Chinese-style architecture in the Old French Quarter, and around the Old Market. In the city, there are traditional Apsara dance performances, craft shops, silk farms, rice-paddy countryside, fishing villages and a bird sanctuary near the Tonle Sap Lake.

You can Explore Angkor Wat ...and Beyond with your qualified guide Sophanna Muon, a native of Siem Reap with a wealth of local knowledge of Angkor as well as other areas of Cambodia. 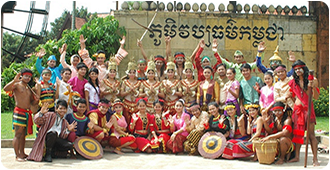 Cambodia Cultural Village first opened to public in late 2003. Covering a total area of 52 acres, this theme park showcases the traditional Cambodian way of life, and the local customs and practices of the various ethnic groups in the country. It is home to more than 10 villages, show 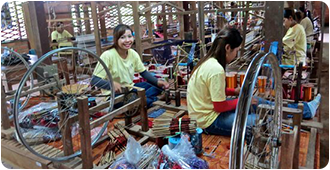 The silk farm was established by Artisans d’Angkor for the revival and perpetuation of traditional sericulture in Cambodia. They provide training in silk production, and produce the silk they use in their products. The guided tour includes all aspects of silk farming and production, from the raising of the silk worms, to dying the silk, to weaving the final product. A very interesting and informative tour. A free shuttle bus leaves at 08:30 and 13:30 from Artisans d’Angkor in Siem Reap. The entire tour takes about 2 hours 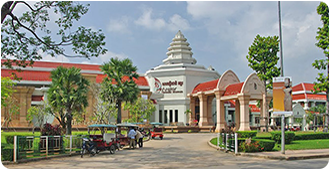 Opened in 2007, the museum houses many archeological treasures and cultural relics from the Angkorian and pre-Angkorian periods. The tour of the eight galleries begins with a short orientation presentation. The galleries include 1,000 Buddha Images, Pre-Angkor, Religion and Beliefs, The Great Khmer Kings, Angkor Wat, Angkor Thom, Story from Stones, and Ancient Costume. Tour guides and audio tour guides in various languages are available. 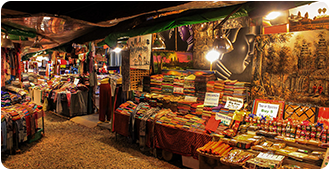 A good reason to visit Siem Reap is the Angkor Night Market. The first of its kind in Cambodia, Angkor Night Market was founded in 2007 with the prime mission to restore as well as preserve traditional Khmer handicrafts while alleviating poverty and improving the lives of Khmer people 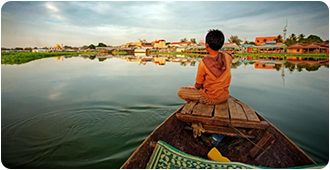 Tonle-SapA boat trip on the Tonle Sap is a pleasant break from temple roving and gives you a chance to see a fishing village. It is recommended you make this tour in the morning, so you can combine it with a trip to the hilltop temple of Phnom Krom, which is best to visit before the mid-day heat. Leave Siem Reap on the main road leading south, and continue across open land until you come to a village and a slight turn on the road angling to the left. You are at the base of the hill on which stands the early tenth century sandstone temple of Phnom Krom. 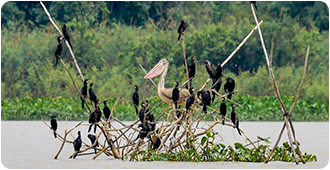 The sanctuary at the Prek Toal core area of the Biosphere Reserve has been called “the single most important breeding ground in Southeast Asia for globally threatened large waterbirds.” The Biosphere covers 31,282 hectares at the northwest tip of the Lake and plays host to species inc