••• our English Speaking Guide will see you at your selected hotel lobby at 6.45AM
* The main temples of the tour with: South Gate, Bayon temple, Baphoun  temple, Pheameanakas temple, here you can see the former royal palace and the two ancient swimming pools, the elephant terrace and lepper king, Ta Phrom temple ( its nick name is Tomb Raider temple with its famous name of the Tomb Raider movie, Ta Nei temple, Bangteay Kdei temple Angkor Wat ( The famous temple and the seventh wonders of the world heritages by UNESCO in 1992 and symbol of Cambodian nation .

* South Gate: The fortified city wall of Angkor Thom with seven meter high and surrounded by the large moats. It is in the better condition if you compare with others four entry towels. Here you can get the iconic shots. Built by the greatest builder King Jayavarman the seventh .
* Bayon temple ( Mohayana Buddhism temple). All towers are with four faces, we have known as the four noble truths of Avalokesvara, Charity, Compassion, Sympathy and Equanimity. It is located in the zero point of Angkor Thom city.
* Baphoun temple ( Dated in 1060AD) is the artificial pyramid mountain temple in Angkor Thom, It was closed 27 years for the restoration work, It now can see the beautiful landscapes on the top of its peak, as well as the a large reclining Buddha at the west part of this temple, dated in 16th century when Khmer king converted to Theravada Buddhism.
* Pheameanakas temple, It means that, the palace in the sky ( Dated in 10th century) with former royal palace and the ancient swimming pools here .
* The terraces of the elephant and lepper king. The terrace of the elephant, It used to be the royal pavilion of Angkor Thom city with amazingly elephant, Garuda and Naga carved. Some of the architectural materials got rotted.
* The lepper king terrace, you will see the statue in the form of the naked statue on the hill lock with amazing legend that related to the 102 hospitals built by Jayavarman the seventh
* Preah Khan temple ( Dated 1191AD, It means the sacred sword). It is one of the the largest complexes at Angkor ,dedicated to the king father ( It probably served as the king’s temporary residence while Angkor Thom was being built. It is the reasonable state of restoration work by world monument fund in 1992.
* Chau Say & Tommanon temples
* Ta Nei temple ( Dense forest and peaceful temple without crowds)
* Bangteay Kdei temple( Dated 1181AD) is the first Buddhist temple by the greatest builder Jayavarman VII for the king’s mother’s Tutor, 274 statue of buddhas found here after excavation work which has been helped by Sophia university from Japan .

* ( Lunch break )
* Ta phrom temple ( Dated 1186AD), Its nick name is Tomb Raider temple. Ta phrom is the most atmospheric ruin at Angkor and should be high on the hit list of every visitor. It has been left to be swallowed by jungle. its original name is Rajavihara ( Monastery of the king ). The amazing trees and tree roots can be seen in ( The Tomb Raider Movie ).
@ Lunch Break, Our tour Guide can recommend or decide to choose one of the restaurants in Angkor sites for lunch break ! 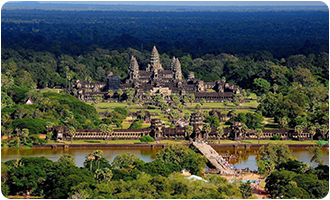 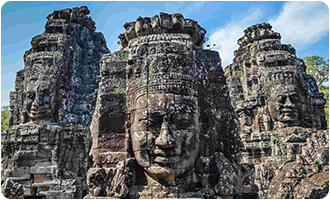 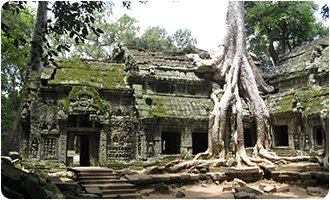 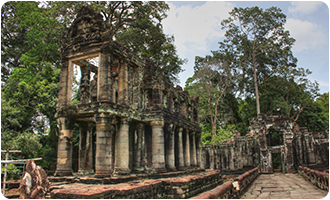 The Services include:
1. The licensed English speaking tour guide / Driver
2. Daily cold water and towels for faces and your hands, sorry not for your feet .
3. Car/Mini van A/C as you have seen in our website

The Services exclude:
1. Hotel/Boutique or villa
2. Ticket for temple @ 37$ per person for Angkor pass
3. Food & drinks
4. Tips at your kindness if you like the services